SPECTRA-PKA is a command-line driven programme for calculating the expected primary knock-on atom (PKA) spectra for a given target nuclide under neutron or charged particle irradiation. NJOY-processed recoil matrices must be provided as the input nuclear data for each nuclide and reaction channel of interest. SPECTRA-PKA will read the nuclear data and collapse the data for each reaction channel in a file with a user-defined energy spectrum of incident particles. SPECTRA-PKA outputs the resulting PKA spectra for each reaction channel read-in, as well as summed PKA distributions for each different recoiling nuclide or element, including both the typically heavy residuals and the secondary-emitted light gas particles. Crucially, SPECTRA-PKA has the ability to process data, in a single run, for a complex material containing many different target species. The user must specify the atomic percentage for each target and the appropriate recoil cross section file, but then SPECTRA-PKA will automatically read-in and process each file and create global average (including as a function of isotope and element) PKA distributions. This feature, in particular, is a significant advancement over what was possible before (such as with SPECTER [1985] from ANL), where typically PKA distributions were only provided for single elements (and not separated by reaction channel) and based on only one nuclear data library (ENDF/B-V in the case of SPECTER). It allows, for example, the user to investigate the variation in PKA distributions as a function of time under irradiation, where a materials composition may change due to transmutation.

SPECTRA-PKA comes with a simple makefile, requiring GNU make and a compatible Fortran compiler. It has been tested with multiple operating systems and compiler permutations, including the standard GNU Fortran compiler.

SPECTRA-PKA is executed from the command-line. By default, the programme expects to find an input file called specter.input in the execution folder, but this behaviour can be over-ridden by specifying the name of an input file on the command-line. The input file provides the user with the option to over-ride the default values of the various code words that SPECTRA-PKA relies upon to control its execution. The input file should be a text file but is largely free from other formatting requirements. Code word values are specified in any order, one per line, via syntax of type:

A complete list of code words (with explanation) can be found on the pdf readme on the git respository for SPECTRA-PKA. An alternative syntax allowing an easier description of a complex alloy (containing multiple target species) is also described.

SPECTRA-PKA uses NJOY-generated recoil cross section matrices. The output files required from NJOY are non-standard and are produced by a slightly modified version of the GROUPR module within NJOY. An evolving selection of databases produced using various international reaction cross section libraries (for various incident particle types) have been pre-calculated and are available to download as compressed tar archives from here (links are also provided in a detailed listing of nuclear data available for FISPACT-II at nuclear data downloads). These can be used immediately with SPECTRA-PKA, or can be used as a template to guide users who may want to create their own input data files (for example, for libraries not currently included on the download page). 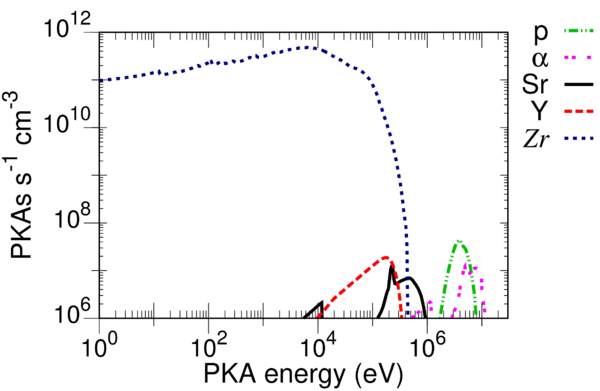 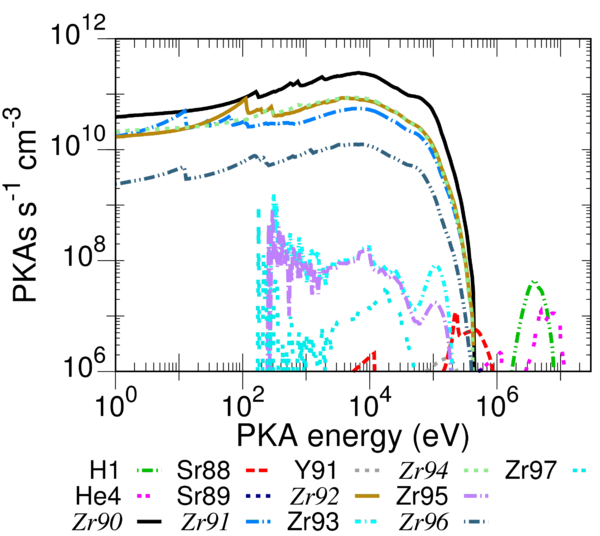 In the folder containing the distributed executables of SPECTRA-PKA there is a "test" folder to get the user started. The folder contains the necessary input files to evaluate the PKA distributions of pure zirconium (Zr) in a typical PWR fission spectrum. To run the test navigate to the test folder and then, on the command line, type:

Note that in the test folder <PKA data folder> in the above has been replaced by the appropriate directory path for the default hierarchy of the FISPACT-II system. The user should tailor this file as necessary to their own system configuration before running the test.

The test folder also has an example_results folder containing the .out and .indexes files that should be produced from a successful execution of the test. The plot_example folder provides example .plt files for GNUPLOT that will produce plots of the summed elemental and isotopic PKA distributions. Users familiar with GNUPLOT will note the use of the index option in each plot command. The index numbers currently used in the .plt files are appropriate for the example results (see example_results/ZR.indexes). Important: Using a different version of the PKA source libraries could result in a different ordering of the results, and so the user should compare the .plt files with the .indexes file from their execution of the test to check that the correct distributions are plotted. The images that should result from this test are given in the figures shown.