Besides the incident-neutron nuclear data libraries, FISPACT-II is also distributed with multiple radioactive decay libraries as well as spontaneous and particle-induced fission yield data files. For a complete list, see the FISPACT-II nuclear data forms. All of these have been fully processed and tested for use in simulations.

One of the standard observables for fission systems is fission decay heat. A series of experiments have been performed over numerous time periods (irradiation and cooling) with different target nuclides, incident spectra and measurement techniques. There are two example simulations provided in the getting_started folder. The fission_U235_2E4s folder contains a simulation of the 20,000 second thermal fission irradiation of U235 which can be compared with the LANL experimental results of Yarnell & Bendt. A second set of simulations are also included in fission_Pu239_pulse which deals with fission pulse experiments on Pu239. That folder contains multiple simulations performed with different decay and fission yield libraries, which can be compared with the ORNL results of Dickens and Tobias statistical meta-analysis.

Inclusion of fission yields in FISPACT-II simulations is not the default and a few keywords may be added to access and control the use of fission yields. The files files already used in first getting_started examples have referenced the neutron-induced and spontaneous fission yield files, but those simulations did not draw upon them.

First let us consider the 20,000 second irradiation of U235. Within the fission_U235_2E4s folder are the six (now-familiar) files:

as well as a plot/ folder and the script fisprun. The fluxes file is quite different in this case, since we will be simulating an exclusively thermal neutron fission and hence the file contains one non-zero entry covering 2.53E-02 eV. The inventory.i file contains a few new options:

The fission-specific keywords are required for this simulation, including the USEFISSION keyword which allows fission processes, FISYIELD which specifies which fission yield files should be utilised and FISCHOOSE which specifies the nuclides whose fission is considered for pathways-based uncertainty analyses. The FUEL keyword allows material specification by nuclide rather than by natural element, using total inventory atoms rather than a mass input. The simulation may be run with sequential fispact commands or through the script, which should return:

Now the inventory.gra graphical output file is populated with multiple responses including activity, heat and doses. Within the plot/ folder are the experimental results YarnellU235t2E4.dat and a plottingn script which can be run using:

This should generate an encapsulated postscript U235_2E4s.eps that matches with the figure presented here. Note that some conversion factors are made within the plotting script to generate the MeV/fission output shown. 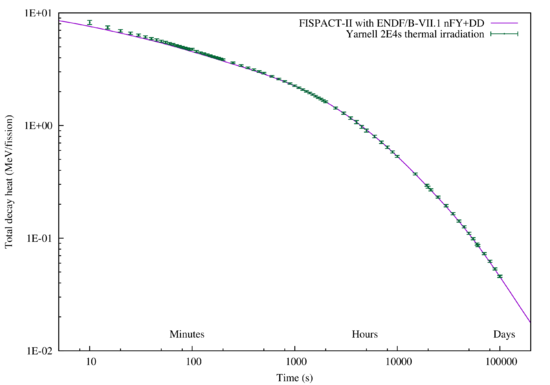 Simulation of a 20,000 second thermal fission of U235 using ENDF/B-VII.1 decay and neutron-induced fission yield data, against calorimetric decay heat results from Yarnell and Bendt.
Retrieved from "https://fispact.ukaea.uk/wiki/index.php?title=Getting_started:_fission_decay_heat_pulse&oldid=218"