FISPACT-II is distributed with numerous processed nuclear data libraries. While these libraries may be effectively interchangeable (indeed many files are actually copies from one library) for some specific simulations, such as reactor criticality, they are generally quite different. Particularly with activation calculations, many reaction channels included in some files are omitted in those from other libraries. The completeness of the TENDL data ensures that this issue does not occur, but for others erroneous simulations can occur without warnings regarding the missing data. The FNS 5-minute irradiation of Inconel-600 simulated in the first getting started example can be easily done with different nuclear data using FISPACT-II. To do this, only the files file must be modified so that it points instead to the different nuclear data. For this exercise find the getting_started/Compare_libraries/ folder. This should have five folders and one script:

Within the plot/ folder, the compare.plt file contains a gnuplot script which can be run after all of the simulations are performed and FNS_2000_5min_Inconel.dat holds the experimental results from the FNS decay heat measurements from the 5 minute irradiation of an Inconel-600 sample. Each of the other folders contain all of the files required to perform the simulation with different nuclear data libraries. Before running the fisprun script, compare the files file within the ENDFB-7.1/ and TENDL-14/ folders. A simple diff check will return:

The only differences are in the ind_nuc (the index of nuclides) and xs_endf (the ENDF6 format cross section data) pointers, which have been altered to run over a different set of nuclides and draw particle-induced reaction data from a different folder. Similar modifications will be made in other parts of the files file in other examples. Now either run all of the inputs in each folder or run fisprun to obtain the simulation results. You should find outputs such as:

Note that while the condense takes approximately the same time in each run, the collapse for TENDL takes about 10× the cpu time. This is due to the much larger nuclide index, as well as the full covariance data which is processed and collapsed by FISPACT-II. Each of the folders should now contain various .out files including inventory.out, as well as the graph data file inventory.gra. The data can be easily visualised using the provided plot script:

which should generate an encapsulated postscript file compare.eps. This should match with the figure below, which shows the decay heat curves with all simulations, the experimental results and all dominant nuclides at (x,y) positions which are their half-lives and end-of-irradiation heat contributions. In this simulation all libraries agree (within the TENDL uncertainty) on the reaction rates which produce 52V and 56Mn, but all libraries except TENDL miss the isomer production reactions and underestimate heat production around 300-3000 s. The original experimental data can be found in Maekawa et al and the validation report for FISPACT-II fusion decay heat simulations. 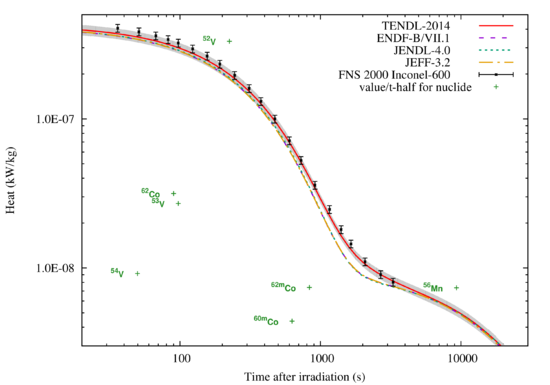