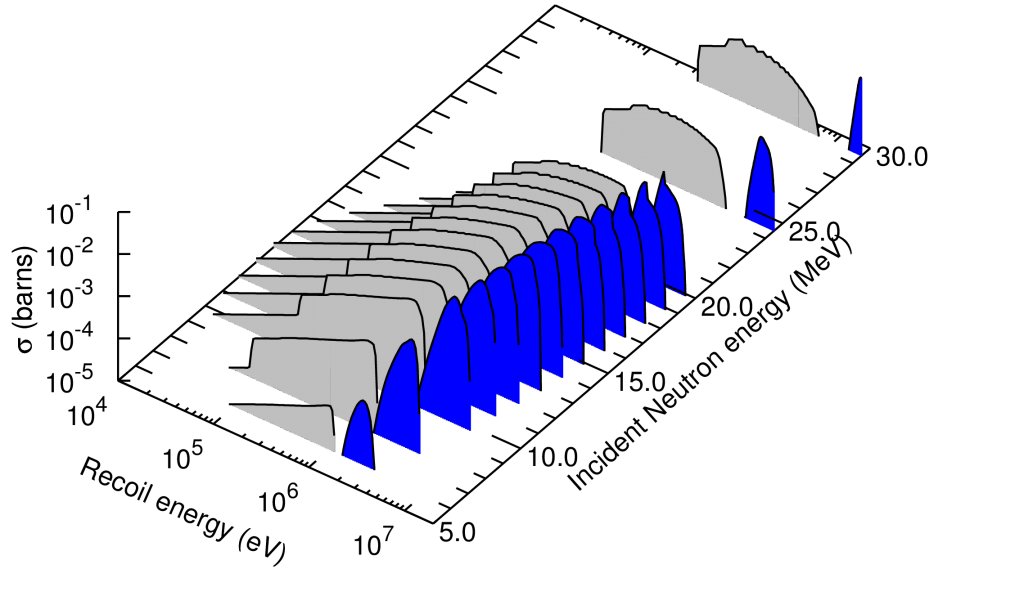 Al27 (n,a) recoil matrices. Both the recoil matrix of the heavy Na24 residual (grey) and the light alpha particle (blue) are shown. For a given incident neutron energy (plotted as the midpoint of the energy group) the recoil cross section vs recoil energy curve is plotted. Note that only a subset of the possible incident energies are shown.

The recoil or PKA probability matrices themselves are calculated and processed from the raw, point-wise nuclear libraries by the nuclear data processing code NJOY through its GROUPR routine, and for an additional library of nuclear data files, complementary to the core ENDF libraries used by FISPACT-II. For each reaction channel, both the recoil matrices of the primary (heavy) residual and and secondary emitted light particle, such as α-particles and protons, are calculated. The figure to the right shows, as cross section versus recoil energy for a range of incident energies, the recoil matrices for the heavy Na24 residual and light 4He α-particle produced from the (n,α) channel on Al27. The 3D representation used here is particularly useful to compare these two related recoil matrices because there is little or no overlap in the distributions at a given incident neutron energy. The reaction channel itself is threshold-like and the cross section is only significant above 5 MeV, which is thus also true for the matrices.

PKA spectra for all particles 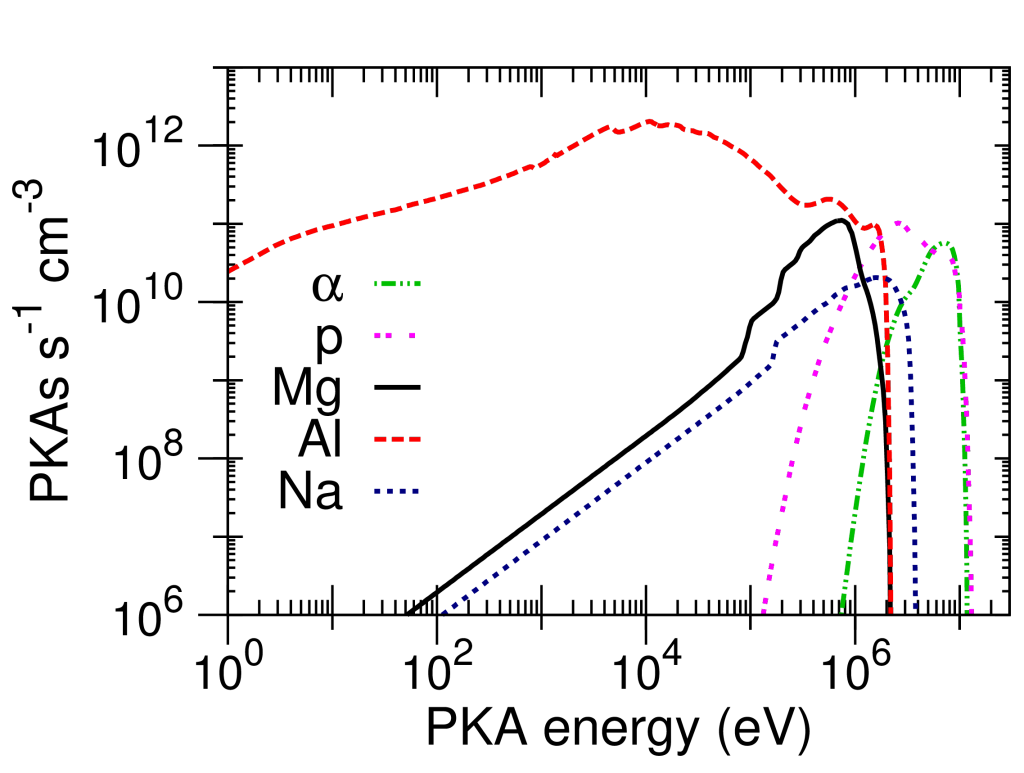 The PKA distributions for natural Al = Al27 sumnmed as a function of the recoiling element.

Each target will have many possible reactions, producing different residuals and light particles with a range of mass differences, Q-values and energy spectra. The figure to left shows the results obtained when these (n,α) channels and all other possible reaction channels on 27Al are combined, by spectra-pka, with a typical neutron irradiation spectrum predicted for the first wall (FW) armour of a demonstration (DEMO) fusion power plant the (see handbook section of the documentation for further details). Rather than show the recoil distribution for every product from all possible channels on 27Al, which are nonetheless available as output, in the figure we show the elemental sums. From the figure, we see that PKAs of Al dominate over the majority of the PKA energy range, reflecting the fact that the simple elastic and inelastic scattering cross section, where the recoil is identical to the target, have very high cross sections compared to the non-elastic reaction channels, particularly at low neutron energies. Only at high energies, in the 100s of keV range and above, do recoil of other heavy particles, in this case magnesium and sodium, become significant compared to the Al recoils of the same energy. Notice that Mg and Na have lower atomic number Z than Al, and it obviously the case that at time t = 0, before any transmutation has taken place, there are no reaction channels that would produce residuals with a higher Z than the parent. Only at later times during irradiation exposure, once some higher atomic number elements have been produced by transmutation and decay, would there be a possibility of seeing PKAs of higher Z number compared to the original parent atoms.

The figure also shows the PKA distributions for the light secondary emitted gas particles of helium and hydrogen, which are labelled in the plot as protons (p) and α-particles to reflect the fact that these hydrogen and helium isotopes will be the overwhelmingly dominant secondary products ((n,d) and (n,t) involving the heavier H isotopes are rare, and reactions producing other isotopes of He even more so). As a consequence of their low mass compared to the target and heavy residual, these gas particles take the majority of the kinematic energy of the reaction and so have much higher PKA energies. Thus, for this first wall fusion irradiation spectrum, with its dominant 14 MeV neutron peak, the gas particles can be emitted with energies almost up to this 14 MeV level. Such high energy particles may have significant implications for radiation damage in materials, even accounting for their low mass.