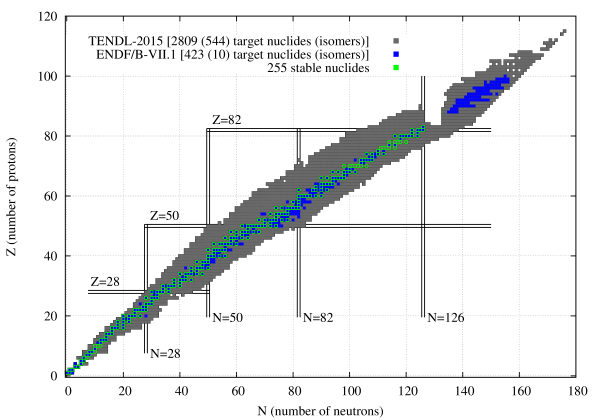 simulation over a wide variety of applications. This includes the most modern evaluated libraries from around the world and the complete, technological libraries TENDL and GEFY. The most recent TENDL-2015 library contains complete files for 2809 target nuclides, in comparison with the 423 within the ENDF/B-VII.1 library – which notably does not include all stables. This is combined with extended decay libraries for the several hundered thousand reaction channels to provide a robust simulation method without the risk of error by omission. TENDL is the annual product of the most advanced TALYS-based code suite which takes all legacy ENDF6 libraries and the most complete reference nuclear parameter libraries to simulate all reaction channels. The recent libraries have been the subject of several verification and validation reports compiled by the UKAEA with international collaboration. 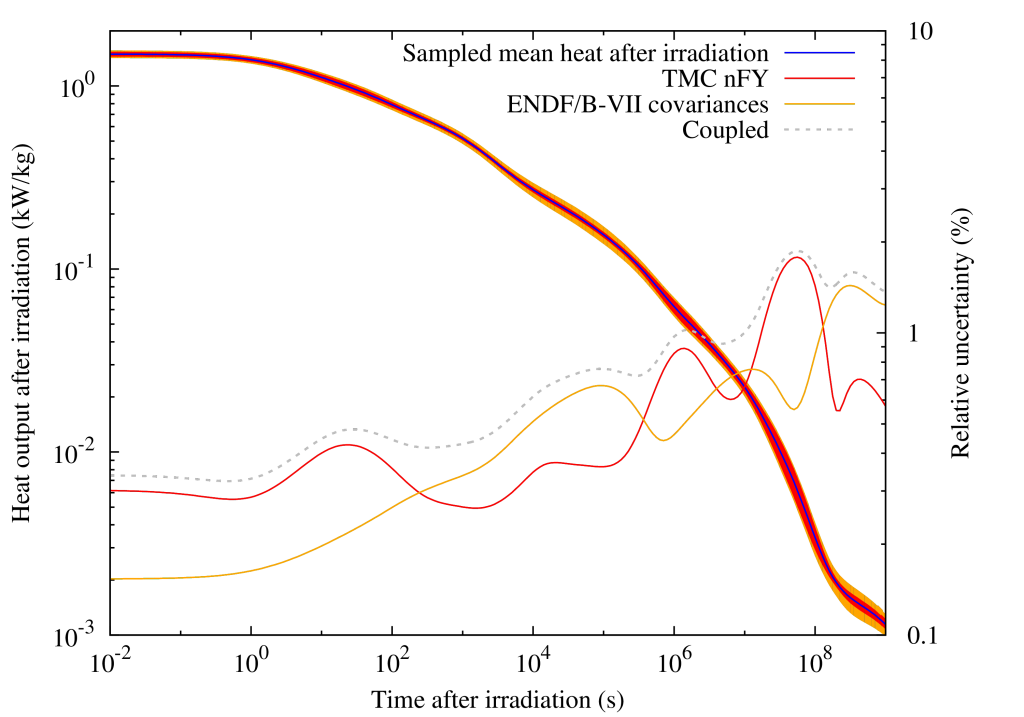 FISPACT-II has been designed to fit, hand-in-glove, with the sophisticated TENDL nuclear data forms. These include complete energy covariances over all reaction channels. For other libraries, FISPACT-II can accomodate different covariance file formats as well, collapsing incident particle spectra to generate one-group reaction rate uncertainties for all reactions. By themselves, they are not very useful, but coupled with sensitivity/uncertainty analyses or pathways-based reaction rate uncertainty, these produce reliable uncertainty values for observables.

Pathway uncertainty within FISPACT-II relies upon a digraph-theoretic approach to identify the reaction/decay paths which result in the production of some essential nuclides. The dominant nuclides for any required response (heat, activity, etc.) are populated during the solver stage and passed to a pruning algorithm which identifies all combinations of links which contribute significantly to the final nuclide. Uncertainties for each decay half-life and reaction rate are combined to determine uncertainties for each path, providing a robust uncertainty in the inventory of the final nuclide.

These uncertainties can be complemented by other methods, such as sensitivity analyses which can be performed using a built-in sampling engine which reads directly the nuclear data uncertainties and effectively propagates them through the full simulation. Another alternative is the Total-Monte-Carlo method, which uses sets of nuclear data files which have been generated from sampled nuclear parameter inputs. The sampling of fully consistent and complete nuclear data files provides the complete set of correlation effect between channels, energies and every other aspect of the files.

The calculation of the energy distributions of residual and emitted particles resulting from nuclear reactions is an important input to the modelling of radiation damage in materials. The recoiling species, or primary knock-on atom (PKA), can induce cascades of atomic displacements, leading to the accumulation of structural damage with life-limiting consequences. Within FISPACT-II, the output of these distributions for an inventory of nuclides exposed to an input neutron spectrum and flux is accomplished via a specially written routine called spectra pka, which updates and improves upon the historical code specter, written at Argonne National Laboratory in the 1980s by Greenwood and Smitther. spectra pka collapses the input neutron spectrum with the full set of incident-energy vs. recoil-energy cross section matrices for every nuclide in the current inventory, which could be at time t = 0 or at a later time, perhaps after a period of irradiation and cooling. The resulting recoil distributions, one for every (open) reaction channel of every nuclide in the inventory, are subsequently scaled according to the inventory nuclide fractions and summed appropriately, as a function of both nuclide and element, the latter being particularly relevant to computational atomistic modelling of materials. A fuller description of spectra pka is available in this reference.

Self-shielding factors (SSF) for the groupwise cross sections are calculated using the probability tables supplied for ENDF-6 formatted nuclear data. These cover both the unresolved and resolved resonance ranges 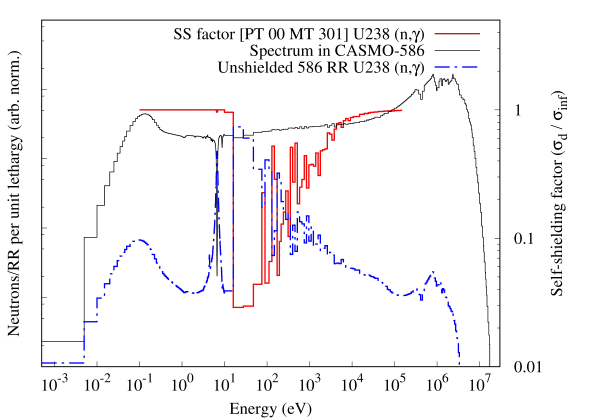 and offer a variety of options for SSF calculation. For example, the factors may be applied over any reaction channels of interest and against any set of nuclides or reactions, against the total or macro-partial cross sections and as multiplicitive factors or as directly derived self-shielded cross sections. Note that probability tables are provided for only select nuclear data libraries within the standard releases, although more can be made available upon request.

The SSF incorporate temperature and material-dependent effects by their construction and can be directly controlled using the PROBTABLE, SSFFUEL, SSFCHOOSE and SSFDILUTION keywords, which control the probability table reading, nuclides to include, reactions to include and an option to overwrite dilution values on an energy-group dependent basis. The example shown includes self-shielding factors for U238 capture reaction rate (red) superimposed over a PWR spectrum calculated by CASMO-5 (black) and the energy-dependent reaction rate (blue).

Note that there are no self-shielding options (or indeed temperature-dependence) for the legacy EAF libraries, which cannot accurately be used for any non-treshold reactions. Users are strongly encouraged to upgrade to a nuclear data library without these limitations.