FISPACT-II has been engineered to accomodate all ENDF6 compliant nuclear data files, regardless of evaluator or country. The most demanding of these files are the TALYS-evaluated nuclear data libraries (TENDL) which cover neutron, proton, deuteron, gamma and alpha-induced reactions up to 200 MeV. These include full covariance information, complete reaction channels and residual production information, amongst many other features.

Above 200 MeV, the High-Energy INCL-based Residual (HEIR) library provides cross sections for all products, based on calculations using the most recent Intra-Nuclear Cascade Liège and ABLA models.

Decay data from all all major evaluations are also distributed with the code, as are the corresponding fission yields. The GEF fission yield files (GEFY) are also provided, which include over 100 neutron-induced and spontaneous fission files, covering over 50 energies from thermal to 30 MeV in a fine grid.

From the 4.0 version onward, FISPACT-II possesses the ability to splice high-energy reaction cross sections in ENDF6 MF10 format. A special-purpose library, the High-Energy INCL-based Residual (HEIR) library, has been specifically developed to provide the ability to extend the physics of lower-energy ENDF6 data up to GeV energies.

The technologically generated TENDL has been released annually since 2008, now with eight distributions in as many years. Considerable experience has been developed from this process, which has been integrated into a fully programmed system, incorporating changes within code to make it as robust and reproducible as possible. The decision to translate lessons learned into the system has resulted in a project which experiences the positive opposite of the ‘nuclear ratchet’, where continual improvement is made each year. TENDL produces the only truly general-purpose, multi-particle nuclear data libraries which include all targets and reaction channels. Now with 2809 target nuclides, 543 isomeric states (as targets) and all isomeric products included in RIPL-3 with half-lives above 100 ms, full variance-covaraicne and production data up to 200 MeV, TENDL has reached a unique position amongst nuclear data libraries. 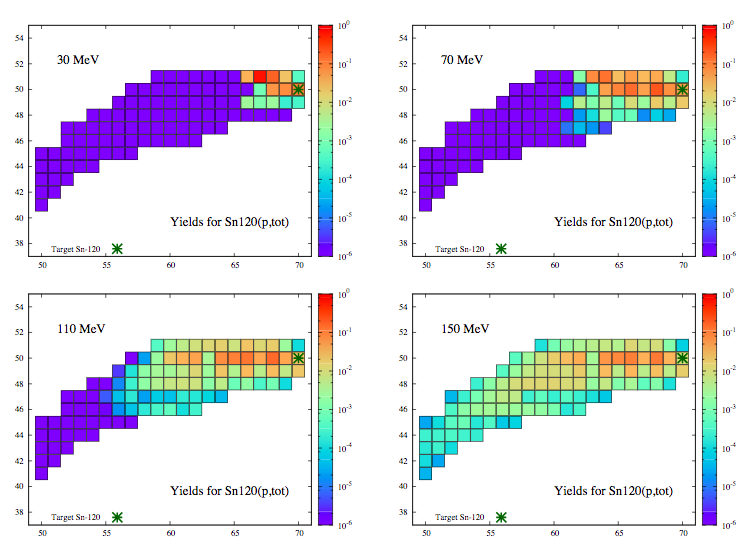 TENDL-2015 proton induced residual nuclide production for incident energies of 30, 70, 110 and 150 MeV. Nuclide production cross sections are summed from all reaction channels. A film of the full yield data is shown below.

Due to the considerable verification and validation undertaken by the UKAEA and various TENDL collaborators, it has been demonstrated to be the best library for many applications, such as fusion and fast-neutron activation. Moreover, it is the only suitable library in many application areas and enjoys widespread use.

Fission yield files are required by inventory codes to populate the various nuclides which are produced in fission processes. These yields are of course dependent upon the charge and mass of the target nuclide, for example U235 and Pu239 generate quite different yields. They are also highly dependent upon the energy of the incident particle for numerous reasons, including the multi-chance fission probabilities which are available at different energies depending on the target. 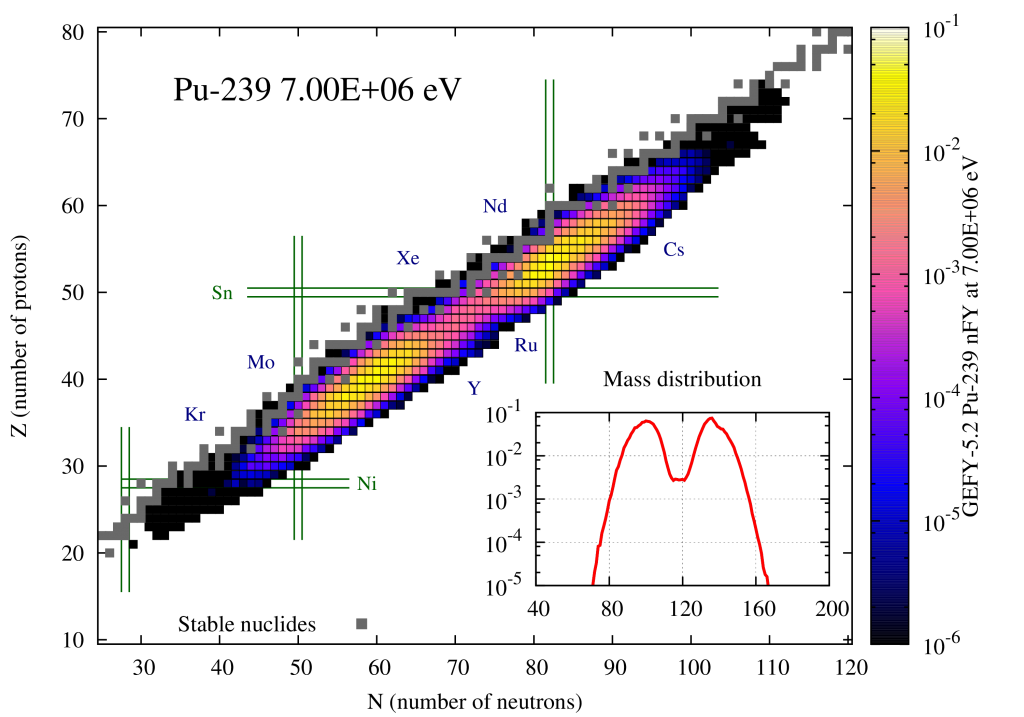 GEFY-5.2 fission yield for Pu239 at 7 MeV, including first and second chance fission events. The complete nuclide chart is shown with a mass distribution is given in the corner.

The General Fission (GEF) model has been developed as a semi-empirical framework for simulating fission events and calculating distributions for various essential outcomes of the fission process, such as mass/charge distributions, emitted particle probabilliites and spectra. The model physics have reached a mature state where simulations using the generated nuclear data files can accurately reproduce many experimental results, even for complex phenomena related to thermal fissions such as fission pulse decay heat (see Documentation). For simulations which require more complex fission data, such as fast reactors or other high-energy systems, two fission yield files at 400 keV and 14 MeV, which may or may not include multi-chance effects, will often not be satisfactory. The inclusion of a GEFY fine grid of yields with FISPACT-II interpolation laws allows a robust simulation capability employing the most advanced fission simulation tools available.

The TENDL libraries and GEF-generated fission yields possess complete covariance data from input parameter variation. Whereas the fission yield covariance does not yet have an agreed format within the ENDF6 structure, this can be accomodated through direct Total-Monte-Carlo methods. FISPACT-II directly accesses the covariance data in LB=1, 5, 6 and 8, projecting the covariance energy grid onto the group-wise cross section data of whatever group structure. The resulting projected covariances can then be collapsed into reaction rate uncertainties for further uncertainty quantification and propagation. More details can be found in this publication.