To ensure that this validation is as robust as possible, a thorough effort has been made to revisit as many high-quality decay heat experiments with complementary neutron spectra, irradiation schedules, measurement techniques and nations of origin. Simulations from theoretical fission bursts to full-day irradiations have been performed, using a variety of nuclear data combinations, and compared with the available experiments. Good agreement between calculation and experiment (C/E) is found for total heat from the major fresh fuel components in actual LWRs, however spectroscopic partial heat and decay heat in thorium fuel cycle nuclides remains discrepant – both in C/E and C/C. For minor actinides where no experimental data was available, C/C comparisons also show substantial differences between data libraries.

Detailed (spectroscopic and total) decay heat break-down by nuclide is also performed for select cooling times and fissiles, using different decay or fission yield libraries to demonstrate the precise cause of the C/C discrepancies. These are found to primarily be due to incomplete adoption of TAGS results for Pandemonium nuclides, but many other decay data and fission yield differences have been identified. Given the tendency for relative agreement on total values, it is clear that many compensating effects are still present. 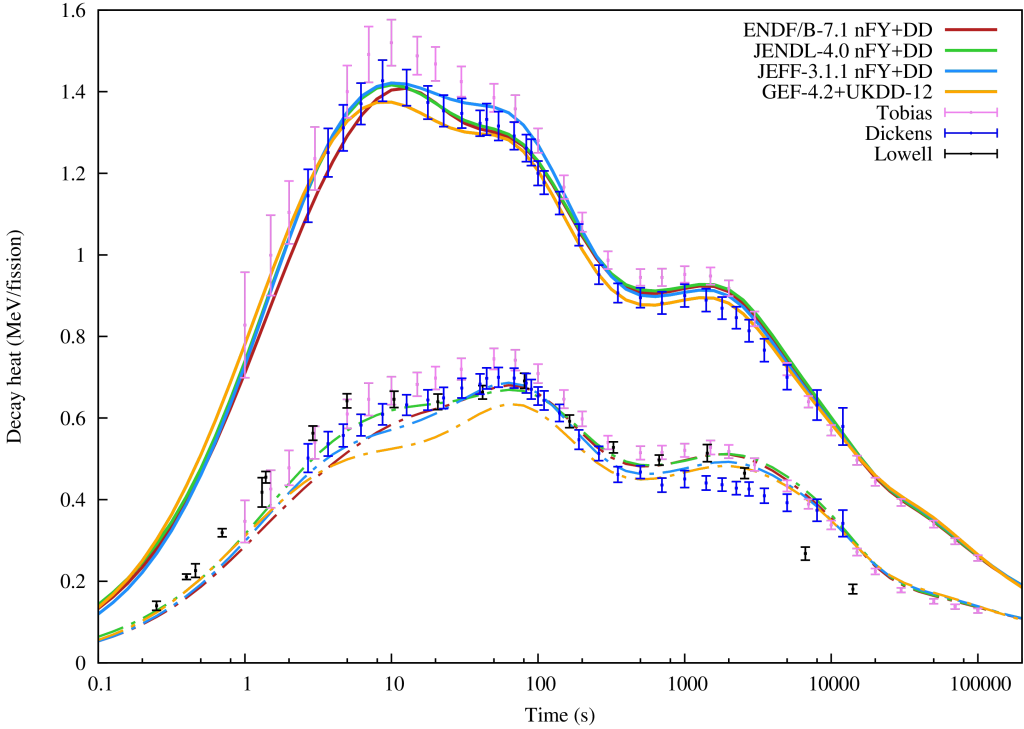 A large set of thermal decay heat experiments have been performed for U235 and Pu239, so that some statistical meta-analysis is necessary to handle the range of experimental values and uncertainties. While some chi-squared analysis may be proposed, the systematic issues with multiple experimental techniques, quality of campaigns and other factors must be taken into account. For these reasons, evaluated datasets have been produced, for example the Tobias evaluations or ANS/ANSI-5.1. Comparisons with predictions from FISPACT-II and other high-quality experiments show excellent agreement in total heat for all libraries, with some unresolved gamma/beta partial heat discrepancies due to TAGS data adoption.

The remaining spectroscopic issues are largely related to the misallocation of gamma/beta energy in decay processes due to a lack of knowledge about beta decay feeding to high-energy excited daughter states. These low probability events are difficult to measure and consequently the average gamma energies are skewed downward, resulting in a misapportionment of decay heat to the beta decay. Totals remain largely insensitive to the choice of decay library, but ENDF/B-VII.1 and JENDL-4.0u generally have more complete adoption of the most recent data which corrects these problems. As FISPACT-II has been engineered to accomodate any and all nuclear data, the user is able to choose to most appropriate physics based on the results of UKAEA validation. 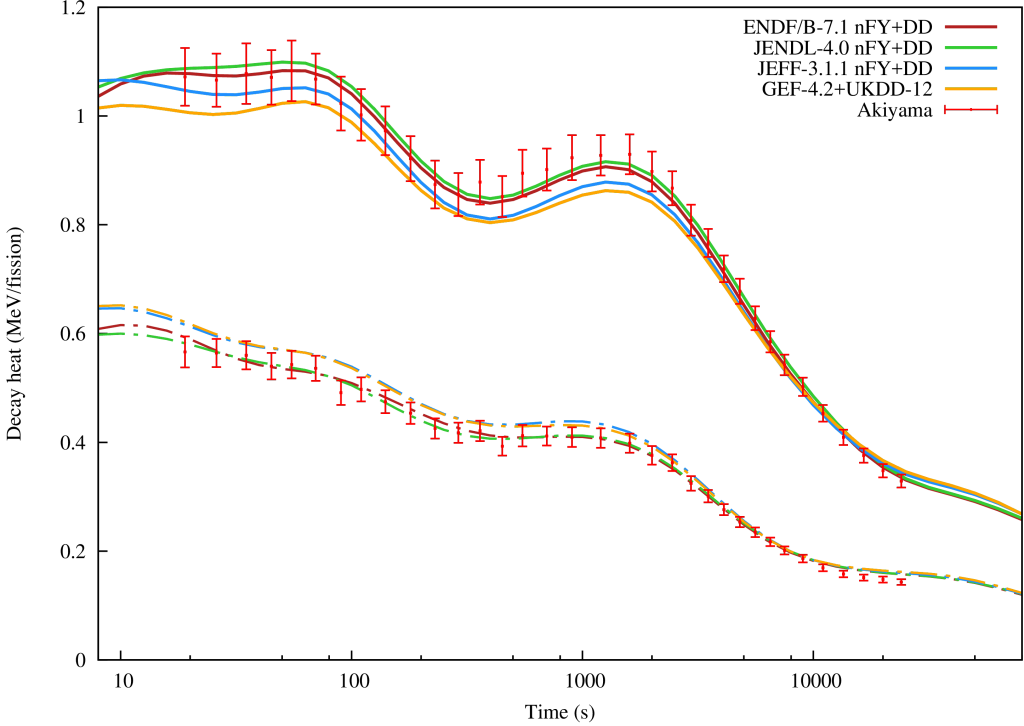 The range of fast fission pulse experiments includes the Akiyama et al measurements using the YAYOI reactor for a variety of nuclides including U233, U235, U238, Pu239 and Th232. These are complemented by UM Lowell data for U238 and measurements of gamma heat from experiments using a Godiva device from Fisher & Engle. Non-pulse fast measurements are also compared, for example from the UKAEA Zebra reactor.

Except for some irregularities with the capture correction in the Th232 gamma measurement, these are largely in agreement for all of the systems considered. Some differences were noted using previous GEFY-4.2 data which led to significantly different total heat predictions in short cooling times, typically less than 10 seconds. These in some cases are not within the scope of the available experiments to adequately probe and it should be noted that the GEF code has enjoyed significant and continued development in recent years and months. At present it is not the recommended library for typical thermal or fast reactor decay heat simulations, but its impressive capabilities make it the only option for many advanced applications and updated versions are continually in development and testing.

Several non-pulse experiments were considered which employed a variety of neutron spectra, 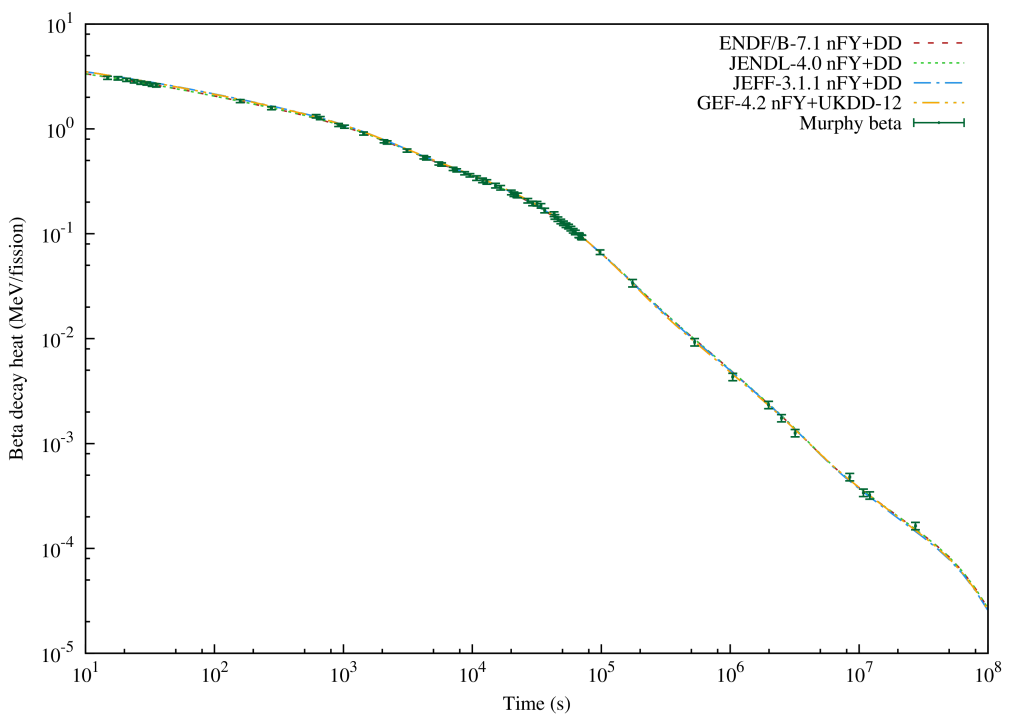 measurement types/techniques, irradiation durations and cooling times. These vary from seconds to years post-irradiation (in some cases both in one experimental campaign), boil-off calorimetry to shielded gamma measurements and fast reactors to thermal columns. Quite importantly, they also include experiments from several countries and continents, including the UKAEA, LANL, Studsvik, CEA, ORNL, CENBG, U Uppsala, KfK, SRRC and JAEA. Agreement with FISPACT-II predictions are generally very good, particularly better than the pulse cases where nuclides which suffer from the Pandemonium effect are less significant and numerous.

The example in the figure right shows a 100,000 seconds (~1 day) irradiation in the UKAEA Zebra reactor followed by beta heat measurements at a huge range of cooling times from just over ten seconds to nearly one year. The impressive agreement for all nuclear data libraries is in part attributable to the lower total number of nuclides which a significant role in a long (cumulative/equilibrium) irradiation. 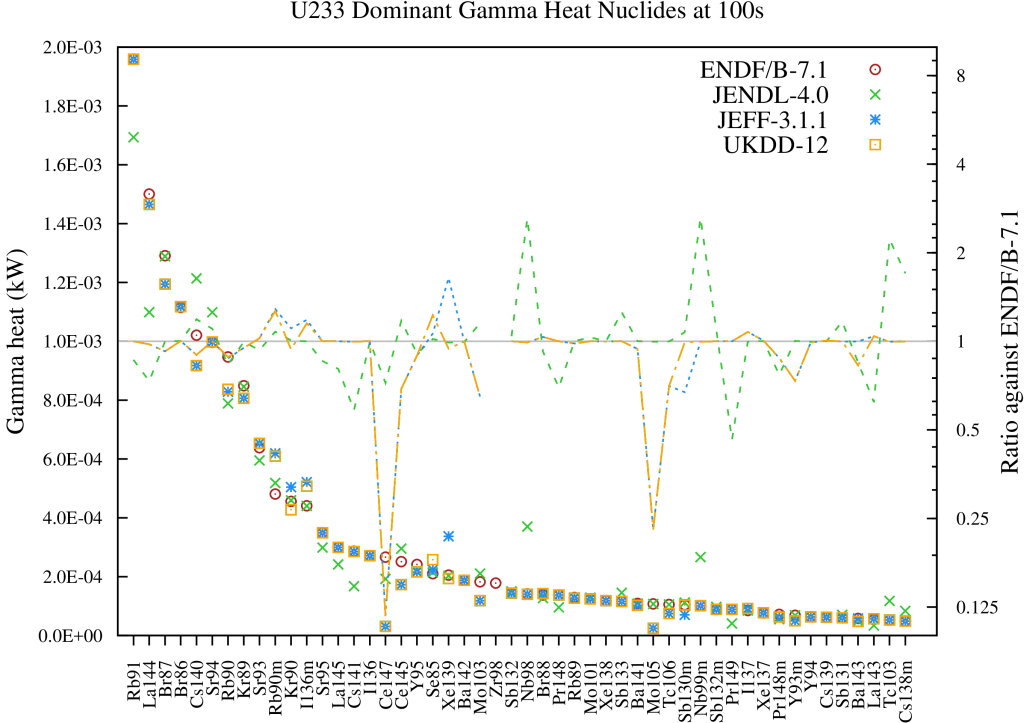 Comparison of the gamma heat at 100 s cooling following a fast U233 neutron pulse. Ratios are given on the right y-axis.

The use of different nuclear data libraries can have a profound effect on the simulation of decay heat for all fissile nuclides, including the main constituents of LWR fuel, for example. To better understand the root cause of these differences, FISPACT-II can be employed by swapping individual decay or fission files and comparing heat and inventories at a selection of cooling times. By doing this, the effects of library differences can be easily discovered and nuclides which both contribute non-negligibly to decay heat and have discrepant yields or decays can be identified.

The robust and open nature of the nuclear data functionalities of FISPACT-II allow it to follow all nuclides and precisely identify those nuclides which are responsible for discrepancies. For the nuclides which suffer from the Pandemonium effect, the beta heat is over-expressed due to mis-allocation of the heat due to high-energy gammas. This is not the only error possible with decay data files – misreading of data from ENSDF, dubious splitting of totals and simple typographical mistakes could also be at fault – but it is the most prevalent problem. To find the root cause, the decay data files must be interrogated by hand (ultimately by decay data evaluators). The example show to left is the set of U233 gamma heat contributors with nominal values on the left y-axis and ratios to the ENDF/B-VII.1 simulations on the right y-axis. In this comparisons JEFF-3.1.1 fission yields are exclusively used to ensure that any effects are solely due to the decay files. Note also the absence of Zr98 gamma heat in all libraries except ENDF/B-VII.1, which is due to files where only the ground state is populated in the beta decay.

Two supplemental reports to the main V&V report provide these comparisons for a large range of nuclides and cooling times, with tabulated values. They are available from: