Warning: Parameter 2 to qtranxf_postsFilter() expected to be a reference, value given in /home/o7418gdvxqln/public_html/wp-includes/class-wp-hook.php on line 308
 FISPACT-II » Systematic verification of nuclear data 
Notice: Trying to access array offset on value of type bool in /home/o7418gdvxqln/public_html/wp-content/themes/grandcollege/header.php on line 51

The full reports discussed in this page are available here:

Cross sections at 0.0253 eV represent a specific differential measurement of prime importance for many applications, but also which dictates the general low-energy cross section curve since the energy-dependence is well-known below the first resonance. While there are some systematics for these values, there is no substitution for measurement. As such, the TENDL code-system contains a reference set of thermal cross section values which must be reproduced in the final files. The verification for TENDL-2014 employed a bespoke set of algorithms for combining the Atlas, CRC and SAFEPAQ reference datasets, identifying inconsistencies and updating a final version. Comparison of these values against inter-extracted values from the TENDL neutron files found excellent agreement except for a small handful of discrepancies which were identified in the UKAEA database construction. These have been corrected in TENDL-2015 and all future versions.

In general, TENDL reproduced the standard values at least as well as the main legacy libraries, with some few bugs which have been completely addressed in a technological manner so that the fix is integral to the library generation and therefore permanently solved. 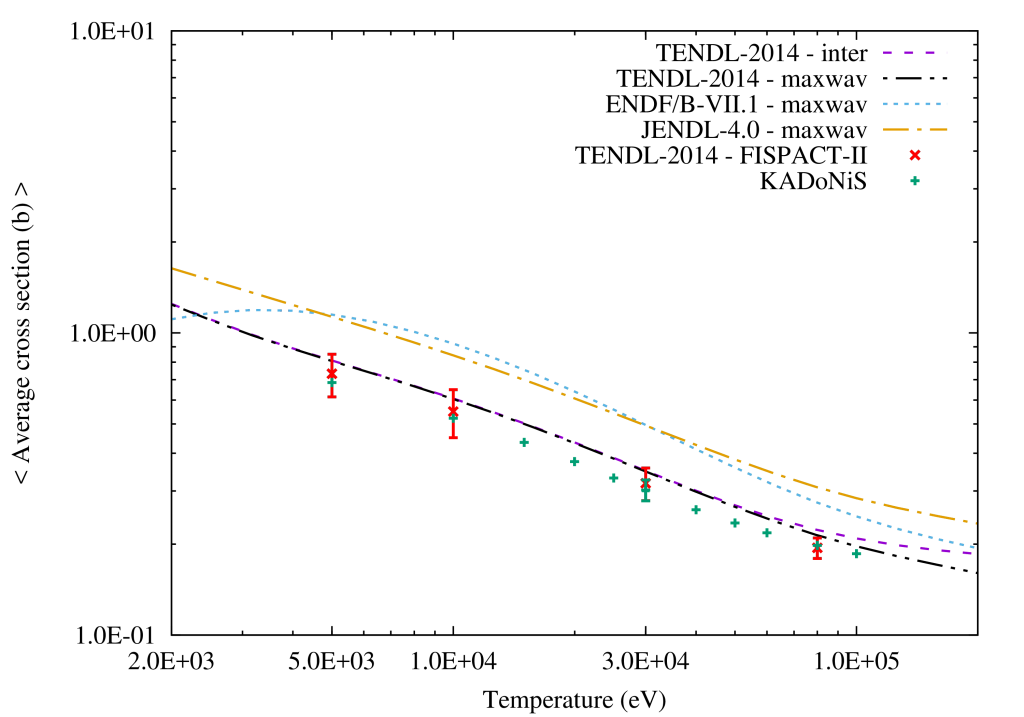 Maxwellian-averaged cross sections for Cd106 as a function of temperature in eV. TENDL and other libraries are compared, with TENDL covariance-collapsed cross section uncertainties provided by FISPACT-II.

Many reaction channels have little or no experimental data, and for those with some measurements, these do not cover the full gambit of energies needed to describe the cross sections. In particular, the non-threshold reaction channels require a huge range of measurements to cover the resonance ranges, thermal values and high-energy components. Resonance parameters are typically generated with generalised least squares methods over a large experimental database, but for most nuclides these are unavailable. In many cases not only are there not resolved resonance parameters, but very little or no integral data is available.

The importance of neutron capture and other non-threshold reactions for stellar nucleosynthesis processes has led experimentalists to measure integral cross sections for reactions which would otherwise have little attention. These are used to inform reaction rates in stellar nuclide evolution calculations which model the elemental composition of the observable universe. The importance of these values has led to the production of an evaluated reference database for Maxwellian-averaged cross sections: the Karlsruhe Astrophysical Database of Nucleosynthesis in Stars (KADoNiS). This contains data for 357 nuclides over a range of 11 temperatures form 5 keV (58 million K) to 100 keV (1.2 billion K). It draws largely upon the well-known compilation of Bao et al, which includes an impressive catalogue of experimental and theoretical sources. While several of the nuclides without experimental information within Bao have been updated in the most recent KADoNiS database, 80 of these nuclides (22%) are based on theoretical, statistical model calculations rather than experimental measurements. Even though not as strong as the C/E validation for the remaining 277 nuclides, these still provide code-to-code comparisons for the TENDL calculated values.

TENDL outperforms well-known nuclear data libraries such as ENDF/B-VII.1 and JENDL-4.0u by both containing 100% of the reaction channels and posessing a better C/E distribution. JENDL and ENDF/B do not contain 68 and 65 of the nuclides as targets, respectively. The full energy-dependent curve of MACS often shows more detail and provides more information to base evaluations upon.

The completeness not only in energy range, but also in open channels and targets, of TENDL dwarfs not only other libraries but also the experimental databases that are available to compare with. TENDL extends the nuclear landscape: having reached the proton drip-line it is now probing the neutron one. It does so with a technological methodology, so that the evaluated data are now more influenced by model parameters than excitation function adjustment. To verify such a library, a set of tests are required which sample different aspects of the nuclear data files and check for unusual behaviour. Since quantities typically vary by orders-of-magnitude over different regions of the chart of nuclides, some systematics provide a more realistic test than simple scans without any physics. For example, the 14 MeV systematics used to check (and build) the EAF libraries may be used, including the (n,p) systematics: 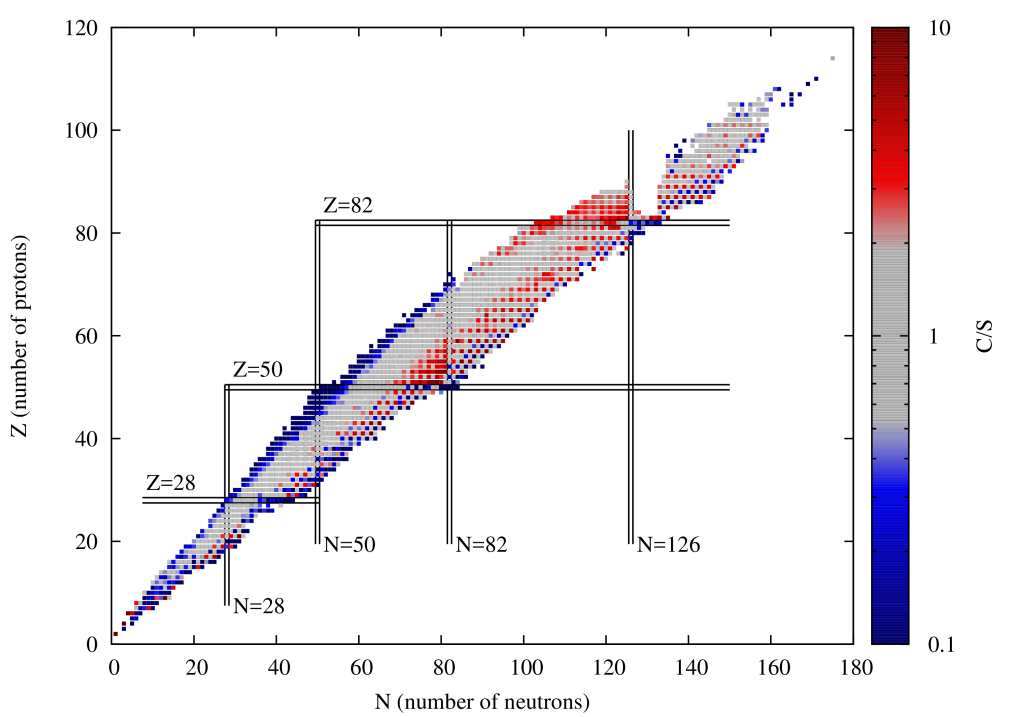 where $A$ is the mass number of the target and $S = \frac{N-Z}{Z}$ is the asymmetry. The TENDL-2014 to systematic ratios C/S are plotted in the figure to the left, where red regions indicate a higher TENDL value and blue indicate a lower value from the systematics. The broad agreement shown here is a reflection of automated tests to identify outliers, which identified even/odd and shell effects which are not present in the systematics, as well as the significant disagreement nearing the proton drip-line. This is due to the addition of (n,2p) and other cross sections, which compete with and then dominate the (n,p) – features which of course cannot be included in a simple, one-line systematic.

This is a general feature of the TENDL systematic probing: TALYS generates data which broadly agrees with systematics generated by fitting data along the line of stability, but brings sophisticated optical model and level density models which, when extended over the range of TENDL, bring much more physics than a chi-squared function with a few empirical parameters.