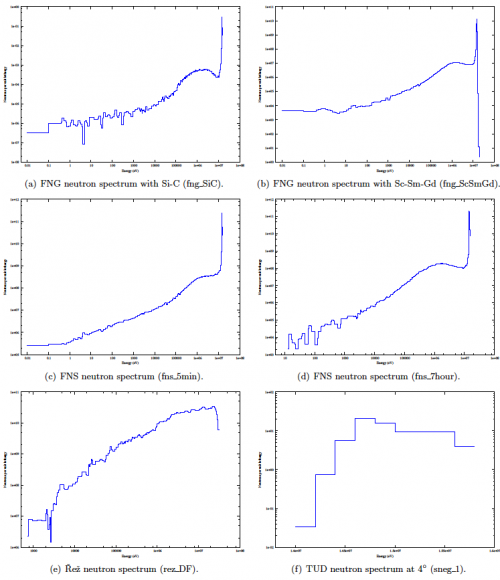 A set of experimental neutron spectra used in the integro-differential validation. These show a few D-T spectra with different environments, a p-D spectrum and a semi-monoenergetic D-T at a low angle deflection location.

The measurement techniques typically include HPGe gamma spectroscopy to identify individual nuclides, spectroscopic or total heat measurements. Normalisations and spectra are determined through various means, from activation foils to ToF and alpha-monitors. Not all experiments are of the same quality and this fact is extremely important when making judgements on the quality of an evaluated file using few measurements.

Identification of individual reaction channels within integral measurements poses a few challenges, including the separation of production of decaying, precursor nuclides (cumulative effects) and isolation of multiple reaction channels, which occurs through multiple target elements, multiple target isotopes and multiple reaction channels per nuclide. Care must be taken not to mistakenly identify one reaction channel with multiple are involved, which could either throw into question an accurate evaluation or ‘validate’ a spurious cross section. The approach taken by the UKAEA is to establish a set of criteria for inclusion and remove those which fail the tests. In those (few) cases removed which were used in previous EAF validations it is highly unlikely that the experiments measured what was claimed. 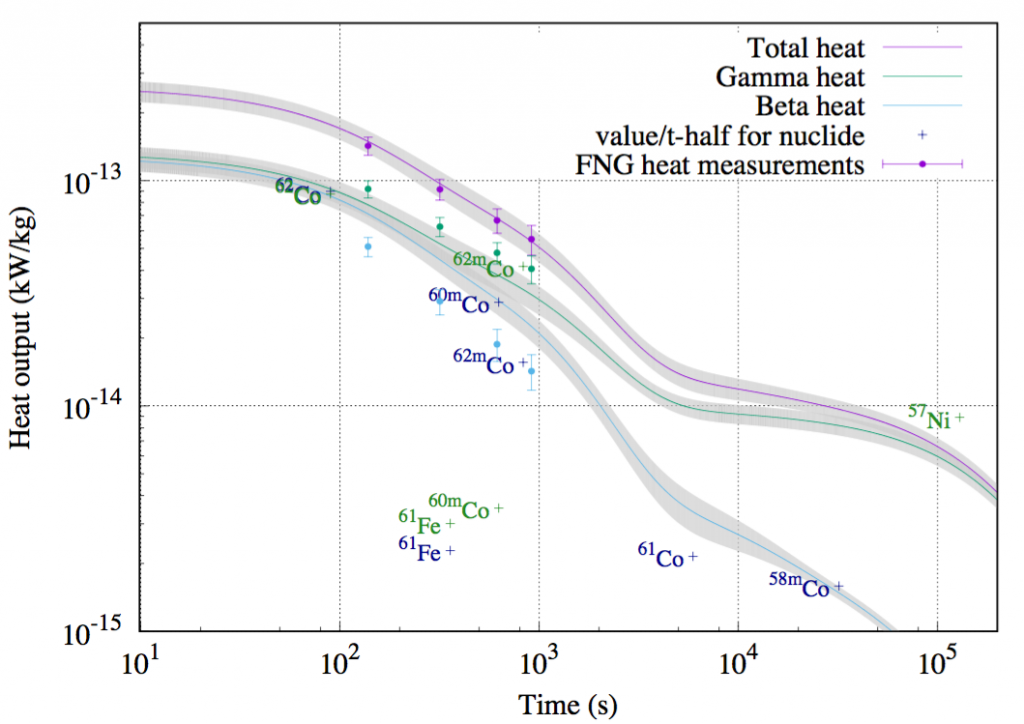 Total and spectroscopic decay heat measurements from an FNG irradiation of nickel with FISPACT-II predictions. Dominant nuclides are placed at coordinates which reflect their half-life and end-of-irradiation heat.

For all integral measurements new pathways analysis using the FISPACT-II pathways search features have been done. These identify the % contribution from each reaction channel and verify that the channel of interest is dominant for the measurement. Even with high-purity samples this can be quite complex due to multiple isotopes or reactions, for example the FNG nickel irradiation shown to left. As in several cases, the total heat measurements reflect multiple nuclides contributing at every time-step. However, at specific points one nuclide is strongly dominant, for example the Co62 and Co62m at the first and last measurements shown in this figure. Decay data can provide an additional concern due to potential misallocation of beta/gamma heat (and other more simple issues such as half-life uncertainty). The apparent discrepancies between beta and gamma heat in the first measurement are reconciled in the total, which has a less uncertain energy per decay. Co60m dominates the gamma heat at 500 s and Co62m dominates the beta and total in the final point. The production pathways for nickel are quite simple, with Ni60(n,p) and Ni62(n,p) generating the cobalt isotopes and isomers. This allows specific identification of each as an integral measurement of a reaction channel.

This level of analysis has been performed in the recent report for the FNS and FNG heat measurements. Results from other laboratories were tested with pathways analyses and verification of the reaction channels available.

Care must be taken when claiming that a reaction has been ‘validated’, since the detailed structure of a cross-section is not fully probed (even with multiple experiments using complementary spectra) and a new experiment using a different spectrum could find discrepant results. Aside from the differences in experimental design, there is tremendous deviation in the quality of the spectral characterisations, simulation tools used to calculate data (ultimately including the effective cross section) and reporting of measurement methodologies. 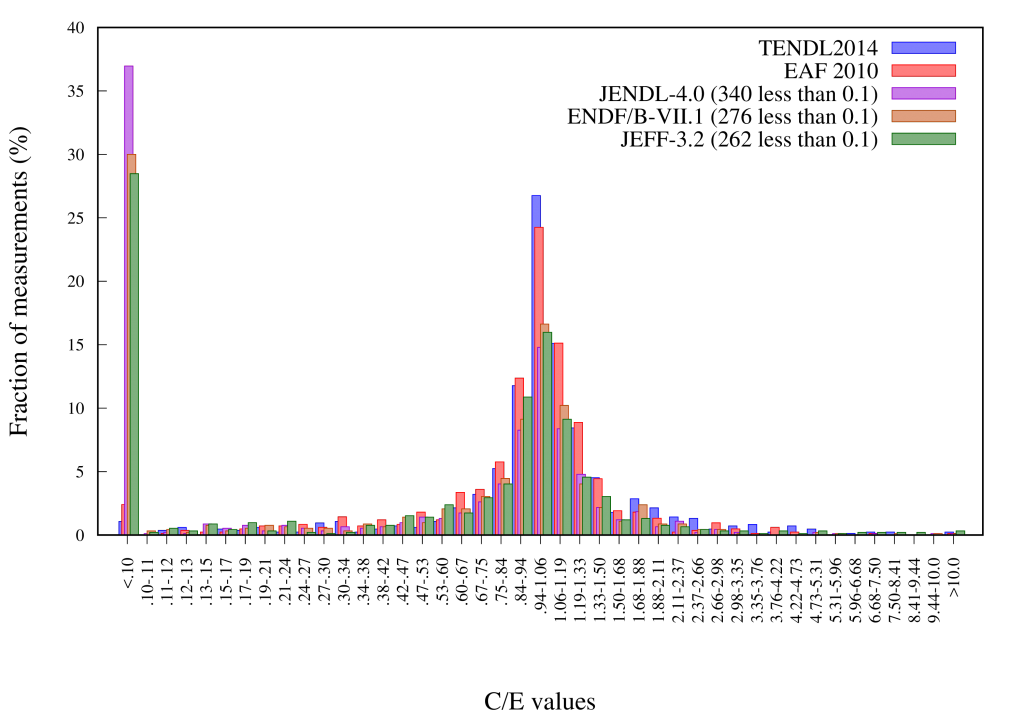 distribution of C/E values, indicating a systematic under-prediction for the integral values of this report. The fact that TENDL provides a more symmetric distribution should not be surprising; the data is derived from physical parameters which globally govern the production of reaction information. In comparison, the asymmetry of EAF belies its methodology, where pathways are included depending on an evaluator’s judgement. As a result, pathways are missing or under-represented and result in an overall under-prediction for nuclide production.

It should be noted that the EAF library was constructed and modified with knowledge of these integral measurements, which were used as justification for renormalisations leading to better agreement with the experiments. That TENDL blindly predicts these effective cross-sections, using physical parameters, with greater accuracy than a library tuned by renormalisations is quite remarkable. When the standard international libraries are used to calculate the effective cross-sections considered the distribution shows a tremendous lack of data, as depicted in beside figure. The most notable difference here is that approximately one third of the C/E values are less than 0.1, with a large majority of these being precisely zero due to missing reactions. This is not unexpected, since these libraries do not contain the data required for activation-transmutation simulations and should not be relied upon or trusted for such analysis. However, it is troublesome since it is often claimed that those libraries are validated for various applications that require these (and many other) reactions.